Dr Aparna has research and teaching experience of over 15 years.

Her teaching philosophy draws inspiration from an old quote that states "tell me and I forget, teach me and I may remember, involve me and I learn." She believes that it is experiential learning that makes the experience of learning both joyful and purposeful.

Teaching is her passion which allows her to be a lifelong learner, enabling to keep pace with the inquisitive minds of young learners.

The values of kindness and the model emphasising "One with the World" attracted her to OWIS where every member of the community is treated with respect.

Promoting Inquiry and Scientific Thinking in the Classroom 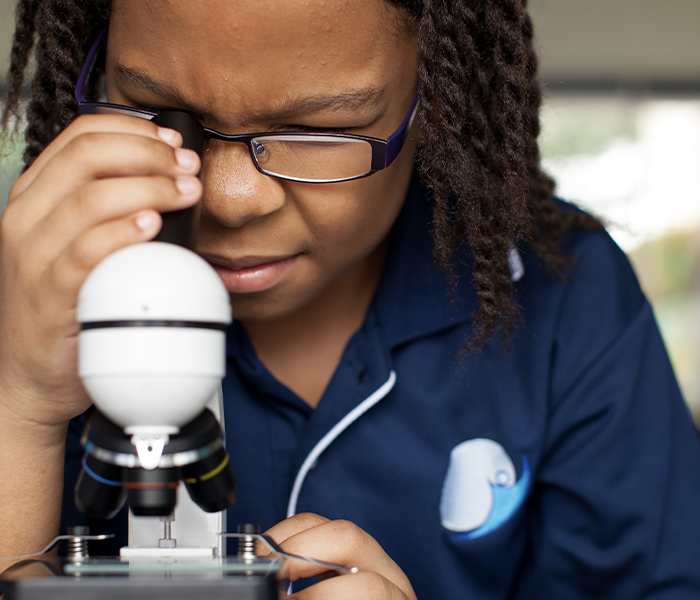 Drop in on a science class at One World International School, and you will likely find students excitedly engaging in hands-on learning. We recognise that science plays a critical role in our complex global society and want our students to understand this role. To deliver science concepts effectively, we encourage the use of scientific inquiry. This path will encourage your child to observe and question theories and concepts in order to deepen their knowledge.

At OWIS, the way we deliver scientific content helps students make valuable connections between what they already know and the new concepts they are learning. We talk about how modern scientific advancements are built on the foundations of discoveries made centuries ago. In a recent discussion about cells in a Biology class, we also considered the development of light and electron microscopes. These innovations gave scientists greater insight into understanding the many components of cells and their internal environment.

Another way we deliver scientific content is by talking about 'accidental discoveries’, often called serendipity. Students need to learn that scientific inquiry doesn't always go as planned. However, many detours on the path of scientific investigation have led to incredible breakthroughs.

One of the most remarkable examples of serendipity revolutionised the treatment of bacterial infections. In 1928, bacteriology professor Sir Alexander Fleming noticed mould growing in his Petri dishes of Staphylococcus colonies. He observed that bacteria didn't thrive around the mould. This unexpected event led to the discovery of a bacteria-inhibiting substance secreted by the mould, paving the way for the introduction of penicillin in the 1940s.

As we prepare to delve into scientific inquiry, we discuss advances in all fields of natural science in the classroom. In our lessons on penicillin, we talked about antibiotics and why they're ineffective in treating viral infections. Our overview of antibiotics led to discussions about vaccines, the invention of the telescope and genetic engineering. Our investigation of the latter topic included a dialogue about the development of stem cells and how they are used to treat diseases such as leukaemia.

Covering these topics in-depth and across different contexts enables students to make connections between what they are learning in the classroom and what they encounter in real life. When students can connect the dots, they're able to see the bigger picture, rather than learning concepts in isolation.

Promoting Scientific Inquiry in the Classroom

We encourage students to question the status quo. Instead of simply taking an observation at face value, we want students to think about how they know what they know. We provide secondary sources so students can research prior scientific knowledge about the topic. With this information, combined with what they have observed, students are better able to come up with a hypothesis (an informed prediction of the outcome of their investigation).

Next, students carry out an experiment to test their hypothesis. They analyse their observations, connecting them to their prior knowledge. Students consider the limitations and implications of their investigation and draw a conclusion that may or may not be consistent with their initial prediction. Whatever the outcome, this process engages students while cultivating critical thinking and inquiry skills.

When students conduct experiments and make observations, they gain a better understanding than they would by just reading from a textbook. Our inquiry-based approach aligns with the quote: "Tell me and I will forget. Teach me and I will remember. Involve me and I will learn."

Scientific Inquiry in Action at OWIS

Recently, one of our students completed an experiment to determine how the intensity of light affects the rate of photosynthesis (the process by which plants make glucose and oxygen using sunlight, carbon dioxide and water). The student defined an independent variable to test (intensity of light) and a dependent variable (the number of air bubbles created when converting carbon dioxide to oxygen). The next step was to form a hypothesis: As the intensity of the light increased, so would the rate of photosynthesis.

To conduct the experiment, the student recorded how many air bubbles the plants produced when the light was shone at varying intensities. The student considered potential risks that the light could be too weak or that the number of bubbles might be miscounted. To wrap up, the student presented his observations, concluding that the initial hypothesis was correct.

Recently, our Grade 11 students conducted a similar investigation into the impact of wind speed on transpiration (how water evaporates from plants). The process of scientific inquiry motivates students to go beyond merely seeking knowledge to become inquirers and investigators.

The International Baccalaureate and Scientific Inquiry

Scientific inquiry is encouraged within the International Baccalaureate (IB) curriculum and particularly in OWIS’ IB Diploma Programme (IBDP). In the IBDP, students are encouraged to develop their personal skills and also their breadth and depth of knowledge. Throughout the IBDP, and particularly within scientific inquiry,  students are encouraged to appreciate and respect the ideas of others while gaining ethical-reasoning skills. This helps them develop a sense of responsibility as members of global and local communities and encourages them to want to better themselves both academically and personally.

As part of the IBDP, students are able to select the courses that best meet their own passions and strengths. Many students who study science subjects as part of their IBDP curriculum then go on to higher academic studies within this area. This helps them evolve into successful, global citizens, ready to make differences to this ever-changing, fast-paced world. This is why it is so important to integrate scientific inquiry from a young age and progress these skills throughout our students’ educational journey.

To learn more about how scientific inquiry can enhance your child's learning, contact us to learn more. Alternatively, if you would like to find out more about our Secondary school programme or the IBDP in particular, schedule a school tour with us.

Originally from India, Dr Aparna Sahni achieved her PhD Master's and Bachelor's Degrees in Biochemistry and a Bachelor's Degree in Law. She has 15 years of teaching and research experience. In the classroom, Dr Aparna utilises experiential learning that’s joyful and purposeful. She’s also committed to lifelong learning like her students. In her free time, Dr Aparna enjoys listening to music and eating Indo-Chinese cuisine.

Tags
Secondary School
The latest OWIS news, articles and resources sent straight to your inbox every month.
Latest from the Blog
What to Expect From Admissions Assessments at OWIS
OWIS Teachers Explain: How We Build Public Speaking Skills in Our Primary Students
IB Learner Profile Series - What Does It Mean to Be An Inquirer?
How We Build Social and Emotional Learning in Our Secondary School

The Importance of Teaching Interpretation in Art Classes in School

What is Creativity, Activity and Service?